skip to main | skip to sidebar

A Week In Review

So, my friend has been over for a week and I (mostly) took a break from the internet while she was here. I also tried very hard to take a break from writing letters and postcards (though when we went into Seattle I bought quite a few!)...but a few made it out...as well as a crafty thing or two.

The mail has piled up, though, so I thought I would just post some favorites from the week I was gone.

First, a nifty hand made postcard: 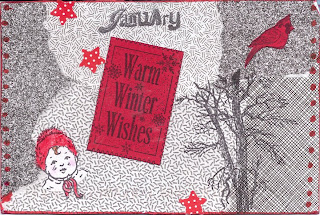 This is from Karen for the Any Kind Of Postcard Swap over on Swap-Bot. It's the first hand made postcard I've gotten, and I think it's pretty cool, seeing as it's made out of old junk mail.

Speaking of junk mail...ever think about getting revenge on the companies that sent it to you? If so, you may be interested in this.

Next up, we have a pretty cool Berlin Wall graffiti postcard: 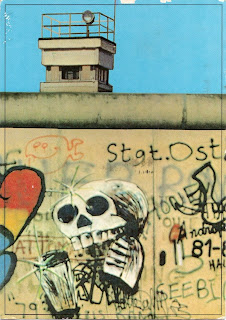 I think it's pretty cool. I don't think it's good to go painting on public walls or anything, but sometimes graffiti is really interesting and/or lovely. This one came to me from Norbert on sendsomething.net.

And now one that really amuses me probably more than it should: 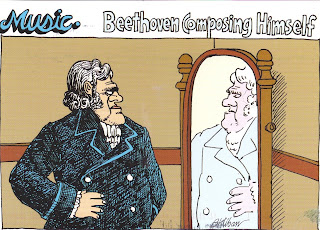 This one is courtesy of Jennifer on Swap-Bot for the We Love Funny Postcards #1 swap. I think it makes me giggle a lot because of my obsession with Mr. Beethoven Lives Upstairs when I was little. I had it on cassette and video! The cassette was best. I also had a lives of famous composers book...but I'm getting off topic...

And last but definitely not least for this post, my absolute favorite piece of mail this week: 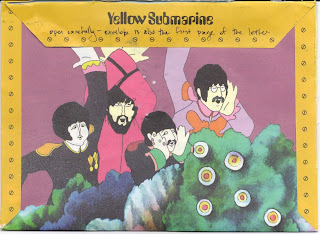 It's the Beatles!! AND they sparkle!! (I hope there aren't any Blue Meanies behind that bush.) AND there was a totally awesome letter inside! It's from Ilona, who has all the best stationary. Also, I guess she likes my letters too. :D

That's all for now, Snail Mail Addicts...if you really want to see more postcards, I suppose you could see my Flickr stream. I'll be back after the mail comes!
Posted by Wolfidy at 02:26 7 comments:

Snail Mail Addict has a houseguest! Regular blog posts will continue on Tuesday the 13th. :D
Posted by Wolfidy at 21:28 1 comment:

Today I was quite happy with the mail. Not only did I get a postcard and a letter, but I also got some ATC supplies I ordered from Amazon a week earlier than expected! Woot!

Outgoing were two ATCs. Should I post some art/craft stuff that I send or just keep it to letters and postcards? What would you prefer?

The postcard was for the Any Kind Postcard Swap on Swap-Bot: 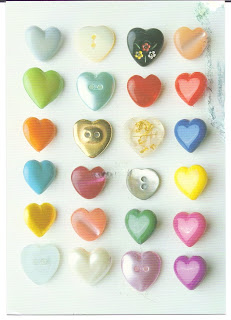 I love this postcard. I have a thing for hearts (I collect heart pendants and necklaces) so getting this was really awesome. It means the sender read my profile before choosing a card, which is really nice. :D

I also got a letter with, what I thought was a nifty stamp: 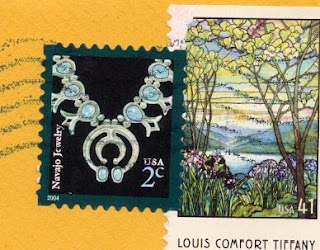 I'm very excited because I have stationary coming in tomorrow so I can finally write back on smething better than notebook paper! :D

I'm also quite tickled to say that one of my postcards has been blogged over on Postcrds A La Carte! :D
Posted by Wolfidy at 00:44 1 comment:

Today was very nice. I walked to the post office to mail off my very first Swap-Bot packages (and seven postcards)! The walk to the post office is fairly pleasant and I am trying to work up the nerve to not care what people think of me and just take some pictures on the way. Since I'm not that brave yet though...on with what was sent:

I didn't think y'all would be interested in pictures of the contents of the boxes, so I skipped that. Only thing I scanned in was the front of the card I tucked into one of the packages: 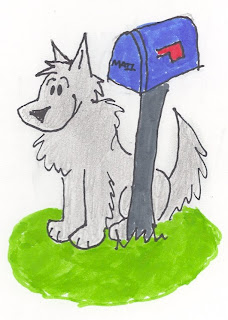 Wolfidy waits for the mail.
Is not my best work, but I thought it would be nice to add a little something in with the packages. I was going to make one for the other package too, but when I looked at her profile again it said "NO HANDMADE CARDS!!" and that made me sad. So I just wrote her a little note.

No outgoing postcard scans today, there were too many and I woke up too late and didn't have time to think about it before leaving for the post office.

The only thing to come in the mail for me today was a postcard, though: 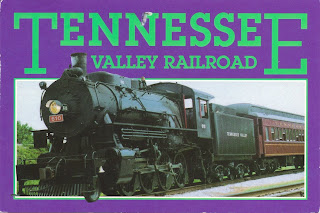 This one is from Karen and was for the Any Kind of Postcard Swap on Swap-Bot. I think it's pretty cool. I've never been on a real train before, unless you count the ones at Disneyland and Knotts Berry Farm. I'm hoping to go one one this summer though. When I go, I'll be sure to buy lots of postcards!
Posted by Wolfidy at 21:09 3 comments:

I am very happy to say that the first mail of the new year was awesome. No bills, no advertisements, just a late Christmas card, a letter, and two postcards. Yay!

First one I'm pleased to say, is my very first anything from Swap-Bot: 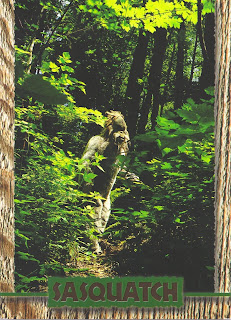 This is for the Any Kind of Postcard Swap. I love it. Sasquach! :D And to think he lives here in Washington! (The card is actually from Tacoma, which is very close to here.)

And the second one is from Boo on sendsomething.net: 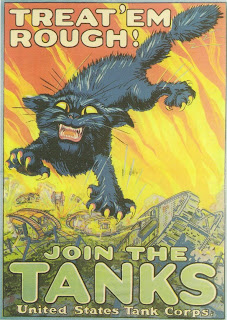 It's a print of an old WWI. Kinda scary looking, but pretty neat.

I would have scanned the back of the envelope of the letter my buddy, Liv, sent me but I messed it up pretty bad when I opened it. It has kitties on it! Maybe she will send me another one at some point and I can scan it then.

And finally, the outbox...I sent out three postcards today. Only scanned in one, though. It's from the same collection as the pickle one: 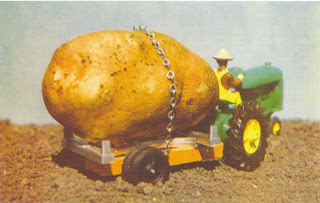 This one is going out to someone on Sendsomething.net who asked for something random. I think the giant potato is random enough. I wonder where this guy is going and what he is going to do with his giant potato of doom?
Posted by Wolfidy at 19:37 3 comments:

Not a lot going on on the last day of 2008. I wasn't sure if the mail would come today, but it did and there was nothing good in it. Boo.

I only sent out one postcard today, too: 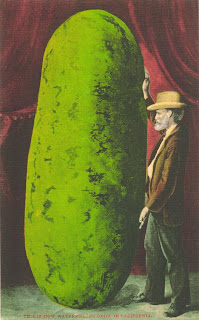 This one's going to a family in France. I seriously thought that that was a cucumber but the back of the card says it's a watermelon. What do you think?

Okay, since I am sending out seven postcards today, I'm not going to scan them all. Instead, y'all can see a little of what I put on the other sides.

Why so many? Well...I sent one to someone off sendsomething.net, then one of my Postcrossing cards made it to Finland, then we got assigned swap partners for one of my first swaps on Swap-Bot. The swap was for five postcards to be sent to five different people. It was fun to stay up even later than normal and do five cards for something completely new.

This first one was just a cute something that was inspired by my swap partner's username... 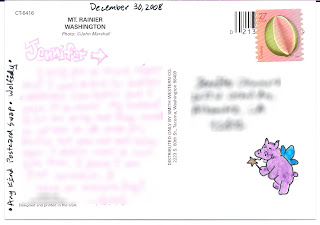 Next, two attempts to recreate something awesome I did for someone on sendsomething.net a few weeks ago...but nither one is as cool as the original. 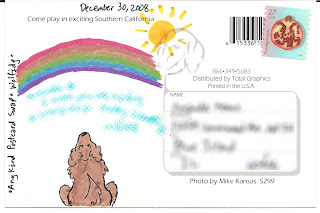 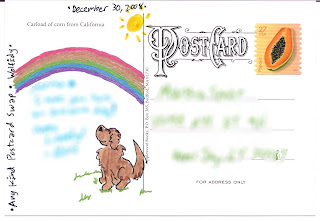 I hope you guys like them. I will probably be posting more in the future.

I am so excited! I got a nice letter from the awesome Ilona today and already sent off a reply. (Sorry it got a little crumpled, I made the mistake of taking the puppy to the mailbox with me to drop them off. Won't be doing that again!) Worse than accidentally crumpling the letter, though is that I currently do not have any pretty stationary! I felt kinda bad about that, considering an awesome letter that was it's own envelope thingy: 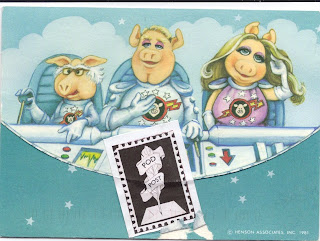 Now I am on the hunt for stationary. I used to have a bunch...but stuff is missing from several moves within a two year period.

I also got a really pretty Postcrossing card from Wilhelm in Germany: 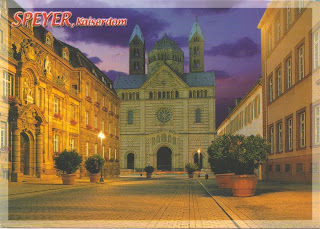 There was a return address on the back, so of course I had to send one back: 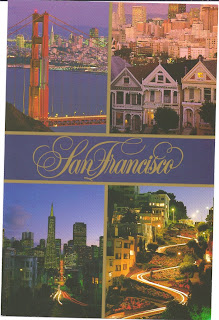 That's one of the cards my friend, Liv sent me from her most recent trip to San Francisco. It's also pretty and had a lot of similar colors, so I thought it would be a good one to send back.

That's all for today, unless you want to hear about bills. See you later, fellow snail mail addicts.
Posted by Wolfidy at 17:20 5 comments:

Hi guys, it's been a while. Between bad weather and mail stoppage, the holidays and everything else going on, it's been a little hard to post on here. Luckily, not much was missed...since I only got one postcard: 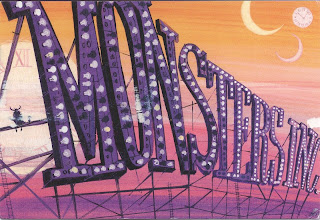 It's a Postcrossing card from Trevor of CA. Monsters Inc. concept art. Pretty cool. I miss California and Disneyland so much! My annual pass is still valid I could go...

And I sent off a few cards without scanning...but eventually the scans are going to repeat, anyway. Like today, I sent off a postcard to my mother-in-law that y'all have already seen. It's the Fort Lewis Gate card. She got a postcard because she sent me a bunch of postcards and stamps for Christmas! :D :D :D She also sent me a Wii game I've been wanting (Rayman Raving Rabbids 2), which i awesome as well....but I never thought I'd be so happy to get mailing stuff. I wanted to draw something nifty on her card, but I wrote too much.

So, today I sent off two of the cards she sent me:
First one was a Postcrossing card (one of my cards finally got to where it was going!) to Amanda of VA: 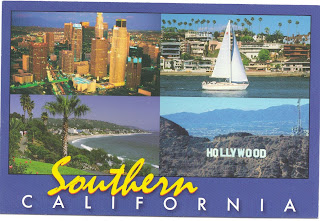 She asked for non-winning lotto tickets, but I didn't have any of those, so I taped a fortune cookie fortune with lotto numbers on the back. "A financial venture may turn a profit sooner than expected. 6 20 21 22 43 . 15"

The second one went to Mandy from NY: 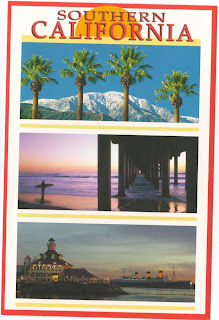 I found her on Sendsomething.net.

That's all I've got for now. I'm going to go check the mail. Crossing my fingers for more fun mail!
Posted by Wolfidy at 15:17 No comments:

Well weather, I am impressed. You kept my mail man from coming. I went out to check anyway...through through the foot of snow you left on the ground.

I am starting to get the hang of doing mail art type things. Bear with me if you got/get something kinda weird. I think it's weird I'm having problems with this considering I'm normally fairly creative.

Speaking of creative, I am looking to pretty up my blogs! One thing I need is a quarter sized air mail envelope. I used to use them all the time and now I can't find one at all! If anyone has one they would be willing to send me, email me: Mutnik@gmail.com

That's all my mail news for now. Hopefully the mail man will be back tomorrow with something nice in my post box!
Posted by Wolfidy at 18:05 4 comments:

Did you know it only costs 27 cents to send a postcard within the US? You can buy postcard stamps from the post office or http://www.usps.com

Know how much your mail should cost and save some money!

Get Your Snail Mail Fix